Who we are and what we do

For over 25 years AMAS IT has helped SME’s to use technology to benefit their business. We are a cross discipline company that acts as a technical hub and central support resource for both our own client base and on behalf of other companies who sub-contract our services.

We offer straight forward professionalism, the highest level of technical knowledge, a broad range of expertise and the obvious experience and confidence that comes from implementing so many past systems. When it comes to investing in the best IT systems for your organisation there is no safer pair of hands.

Our network support team has a straight forward approach to service – take responsibility and get it fixed. Whether it is a hardware issue, a software fault, a cabling problem or a glitch in the operation of a remote virtual server we will diagnose teh problem and fix it – the buck stops with us.

AMAS IT fully appreciate the inconvenience and potential revenue loss caused when your system fails. We support and protect every aspects of your system, so no matter what the underlying problem is we will fix it, quickly and efficiently.

Most SME’s cannot justify the expense of a full time IT department, but still need the functionality of much larger organisations where applications are often spread across hosted platforms with core applications typically still held on-premise.

AMAS IT limited is an independent company that works as part of a group of associated companies (collectively known as Advanced Group) that together provide a full range of technology services; our associates specialise in different areas such as telecoms and infrastructure cabling provision.

We offer on-premise field support at locations throughout the UK and Europe using a partnership network permitting us to deliver on site service using trusted local providers.

In order to competitively price development projects for plugins and apps for our business software we sub-contract much of the coding to teams in the Philippines and India. All coders are individually known to us and offer the highest level of professionalism and reliability.

By outsourcing your IT department to us you will gain from the extensive expertise of a team of IT professionals for a fixed low monthly support payment. 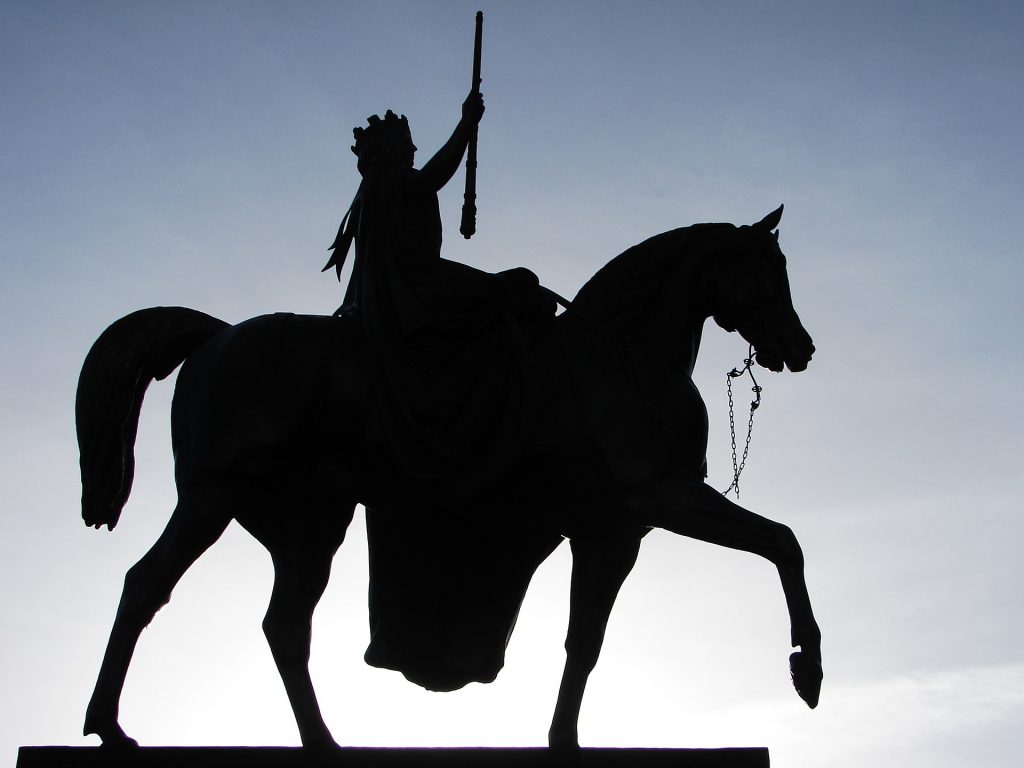 With more experience that they care to remember.  AMAS IT is and independent part of Advanced Group which also includes telecom and cabling infrastructure services and act as a northern support centre for Interprise UK. 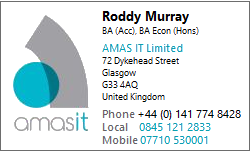 My career started in the late 1980’s when I joined a company (Beta Computers) based in Linlithgow that developed a range of Financial Systems targeted at the financial intermediaries, banks and pension funds. As the business developed I moved from development into technical sales becoming the Major Accounts Manager in Scotland before leaving Beta to start my own software company.

Having built the business (Advanced Management Accounting Solutions) through the 90’s to become Scotland’s largest Sage Solutions providers and a leading SME applications provider, I concentrated on developing software plugins for Sage.  During this time I designed and developed a range of SME applications including the TeamNet System used by DX Communications (with over 200 sites it was the largest Sage System ever implemented for Sage Line 100) and the Global Trader EPOS system.

I took some time away from the IT Industry in 1997, purchasing a Restaurant and Bar in Glasgow Mojo’s.  With two partners, including the Celebrity Chef John Quigley, we went on to buy the old Christies Auction House on Bath Street and build the night club Lowdown and restaurant Quigley’s before returning to AMAS in 2002.

I am a very experienced Microsoft Support Engineer since the 1990’s (before I turned to Microsoft I was a Novell Engineer), a system audit consultant (forensic accountancy) and is an experienced software designer and developer.  I have extensive experience as a company director. 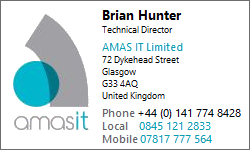